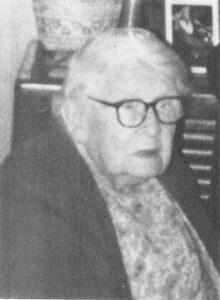 Harry and Betsy Henton kept the corner shop at Number 2 Thoresby Road, Mansfield Woodhouse from about 1916. After Harry died in the early 1930s aged 73, she continued to run it alone, and even when currency decimalisation was introduced in 1971 she took to the new system like a duck to water. At the grand old age of 94 in 1976 she was named the oldest shopkeeper in the Mansfield area. The end of an era came when in 1980 she had a fall and had to stop working there and then she died later that year aged 98.
The twosome met when they were neighbours at Clumber Street, Shirebrook, she and her family had moved there when her father John found work at the colliery. Her mother Elizabeth, nee Winter, had died when Betsy was only six years old. Harry at that time was a miner at Warsop Main Colliery.
Before the turn of the century and still a teenager, she and Harry married and moved to Mansfield Woodhouse to live at No 81 Thoresby Road, from where they ran a travelling greengrocery business. Their mode of transport was by horse and dray and they stabled their horse on their allotment across the road from their house. Harry continued to work at the colliery while maintaining the greengrocery round. But his health started to fail and so about 1916 when Betsy was 34 and Harry was in his 50s they decided instead to open the greengrocery shop at the other end of the street on the corner at No 2.
They proudly said that their little shop opened every day of the year between 7am and 8.30pm and sometimes the door did not close until 9pm. They sold not only greengrocery, but ice cream, sweets and cigarettes as well. Children who affectionately called Betsy ‘Mam-Mam’, loved the array on sweets on sale and made a bee line for the penny liquorice sticks, bubblies and caramel lollies. Also at Christmas time Betsy used to make and sell about 3 hundredweights (about 150kgs) of pickled onions.

There was a post box in the wall next to their shop and this photo taken about 1980 shows that the shop did not even have the Henton surname on the signboard, or if it once did then it had faded away and was no more.
When there were no customers in the shop, Betsy would retreat into her sitting room and sit on the sofa still in sight of the shop door to await her next customer.

Betsy was a diminutive woman of less than five feet in height. I suspect she had a sense of friendliness and kindness to see her through life.

Here the corner shop and much of one side of Thoresby Road is cloaked in scaffolding and hidden from view. It is most unusual for a shop to have only the one family as shopkeepers for its whole life and in the same trade of greengrocery. I wonder if anyone else took on the shop after Betsy died or did the shop remain vacant until it along with the whole street was razed to the ground beneath the tracks of the demolition bulldozers in the early 2000s?

PS. This article is the first in a series about the corner shops of Woodhouse. Please email us with your memories. If you have photos of the shopkeepers send us those as well. It would be wonderful if we had a photo of Harry Henton to add this story.